Books can be vessels of possibility. Like seeds, they contain potential for expansion and transformation.1

The altered book, on the other hand, can be defined by the format of an existing book which the artist recycles or transforms into new works of art that convey new ideas and images alongside or over the original text or context. They may use not only printmaking techniques but also drawing, collage, painting and sculpture.4 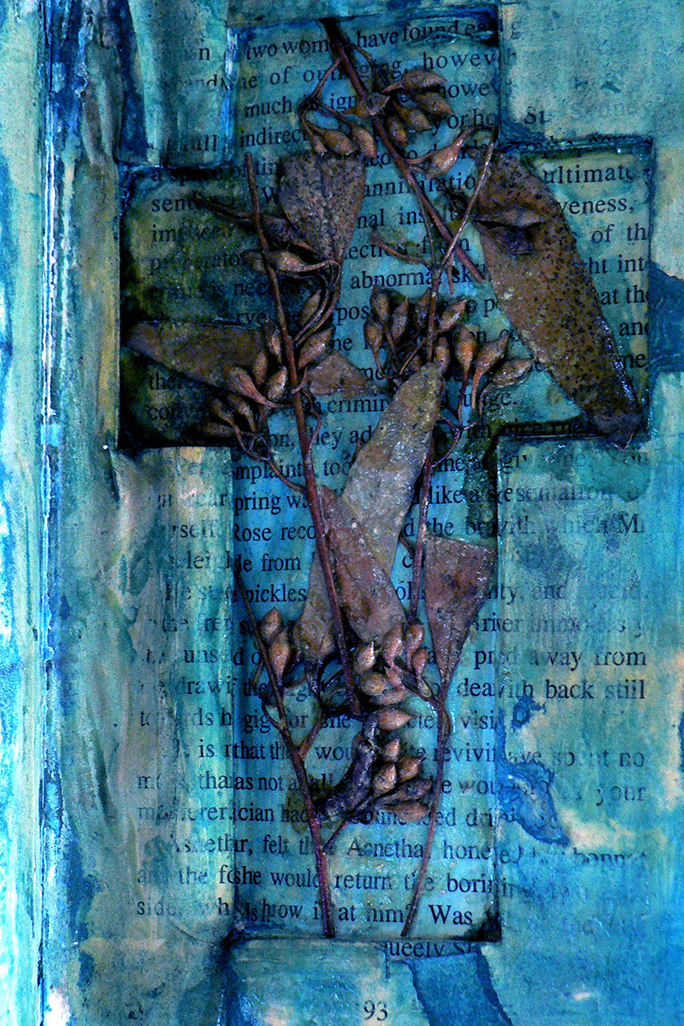 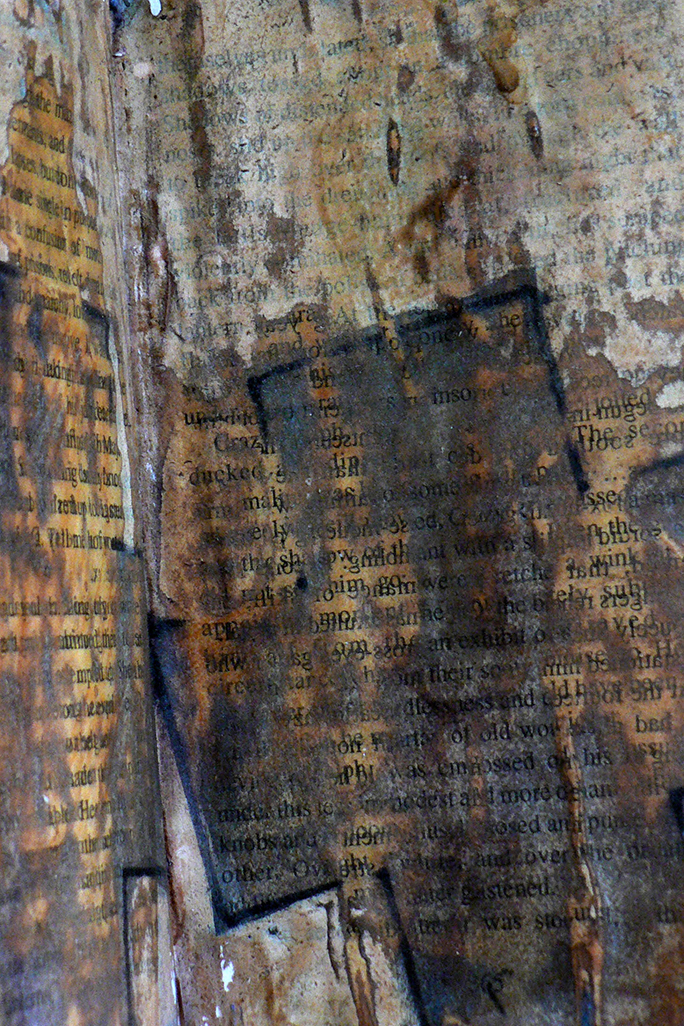 The above examples, Figures 1 and 2, are from a book entitled The Tilted Cross. I have used this image throughout the book to create a contextual relationship to the title. A technique I use in my altered books is gluing several pages together and sanding back so that the resultant effect becomes asemic writing.6 The final half of the book’s pages were glued together and carved out to create a cavity for collage or the insertion of objects.

The concept of recycling is important for me, as some older books may contain paper that would have come from rainforest trees — now rare or extinct. The concept of history is also imbued in the book. The book has been handled in the past by other people, passed down or bought and sold. Books contain this element of trace or memory usually in the form of written inscriptions, stamps and the aging of the cover and paper. 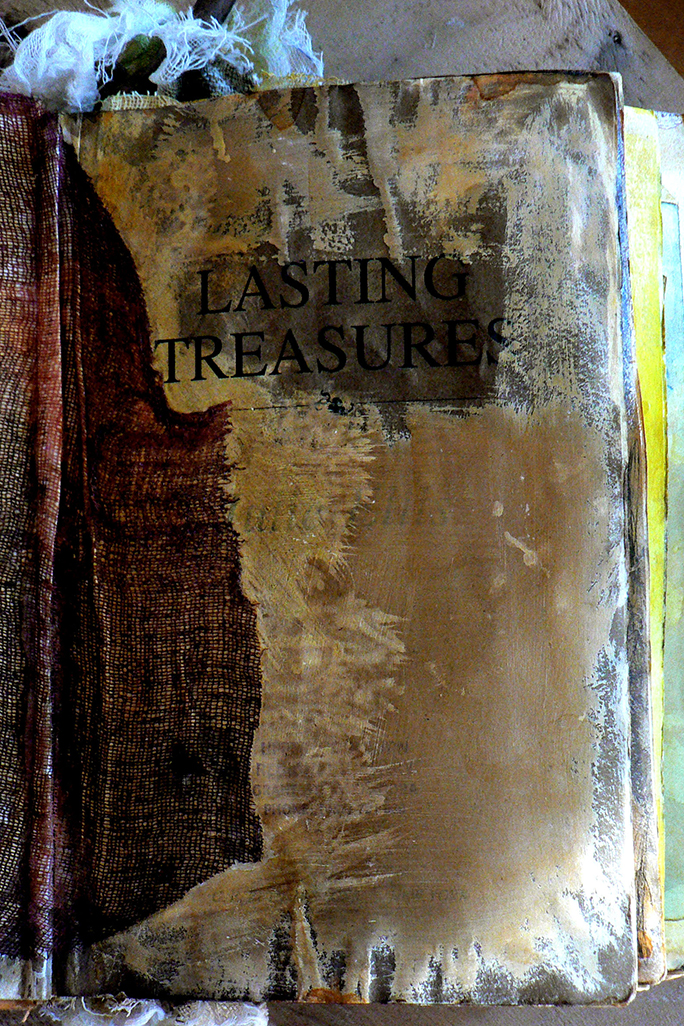 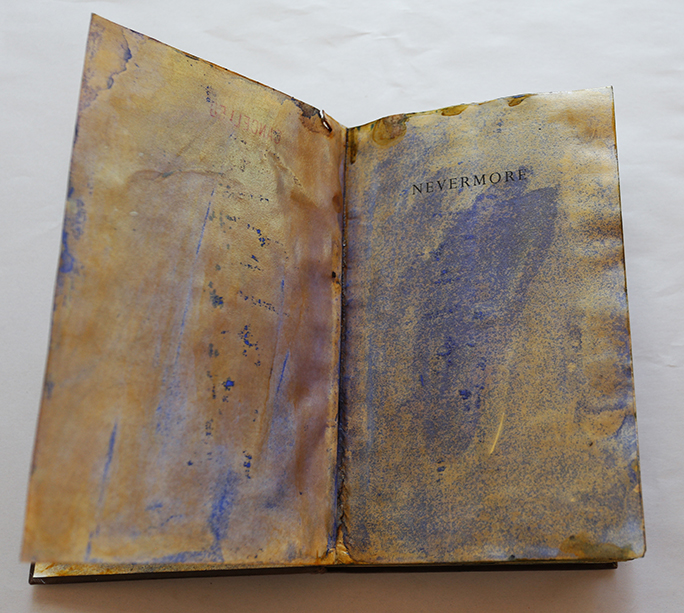 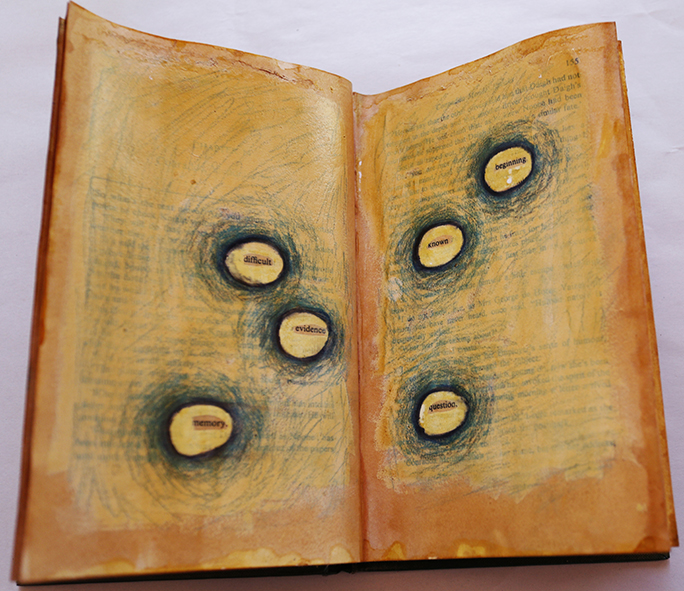 The artists [altered] book is an object that has physical qualities — size, texture, surface — that the viewer can touch and interact with. They are also sculptural objects. 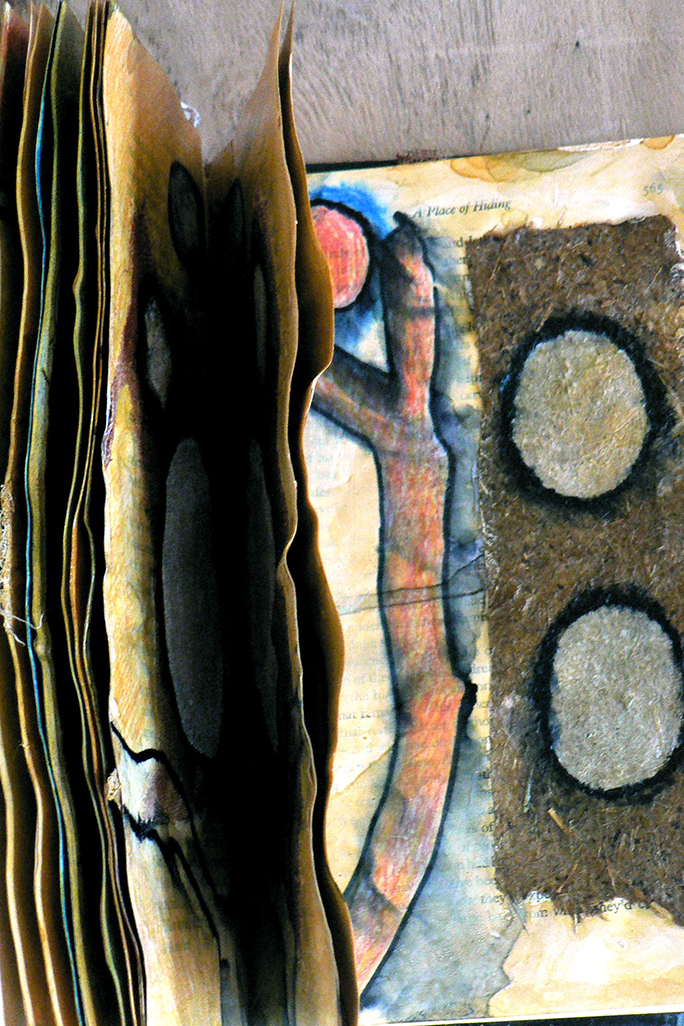 Drucker (1998: 195) questions how, as an aesthetic practice, the artists book might be defined as an art form in a way which differentiates it from being simply an artfully crafted object. She says it is the artist’s aesthetic vision, the selection of elements — images, text, materials — and the process by which they evolve into a book that are key to its interdisciplinary status as an art form.

The book is also more than an object, it is an idea. The book embodies the idea of containment — many images and ideas contained in a small space which becomes personal and private as well as tactile. The object/idea can be made to look mysterious and sacred, thus imbuing the content with the same attributes. 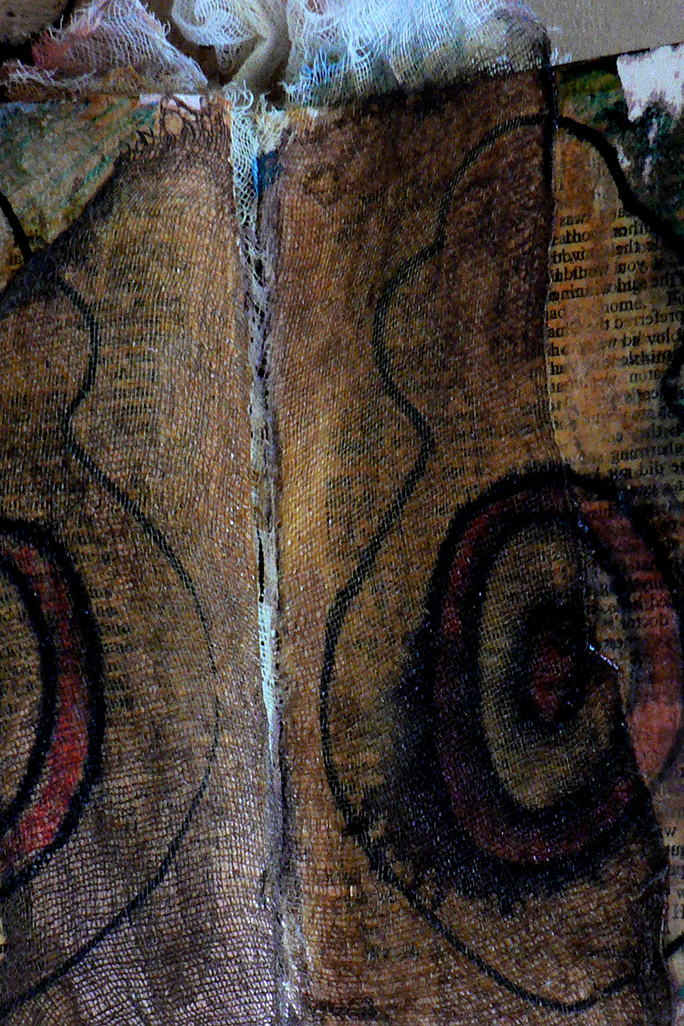 The materiality and conceptuality are what intrigues and interests me about artists [altered] books. Such books can explore the interplay of content and form where, as a ‘book’, the role of text can be made integral to the work, and the use of pages and sequences are used instead of a single sweep of an image (Selenitsch 2008: 5). The use of text means that the artist can work in a ‘poetic’ way. As shown in the examples illustrated, I choose the books I wish to alter by the title, not the story or content, as this inspires the images and sequencing. Isolated words are usually selected in some way from the text and their emphasis or highlighting creates a different context for meaning. Language and text as a ‘material form’ having the capacity to ‘be’ as well as to ‘mean’ (Drucker 1998: 13–15).

The use of text and writing not only functions to express an idea, as elements of language, but also functions as image or visual medium. Drucker says, ‘because of this fundamental dualism, writing is charged with binary qualities. It manifests itself with the phenomenal presence of the imago and yet performs the signifying operations of the logos’ (1998: 57). Thus it is both an act of individual expression, and an instance of the social and human system of language:

Writing thus exists along a broad spectrum from the most elemental gestural trace to the standard sign. All writing has the capacity to be both looked at and read, to be present as material and to function as the sign of an absent meaning. It can be structured and shaped — or merely accumulate according to standard conventions. It can be found, appropriated, manipulated and effaced. As a form of individual expression writing is a somatically inflected sign, a production of the bodily self which seeks identity in an image of its own making. As a social and cultural system, writing partakes of the semiotic conditions of meaning production within the constraints of the rule bound system of language. The richness of written language resides in these multi-faceted qualities, and from them, as a consequence, many curious contradictions and parallels open in the field of writing. (Drucker 1998: 59) 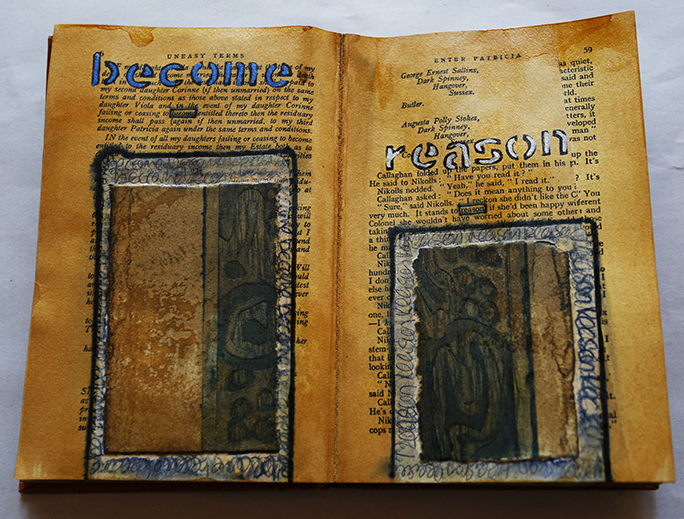 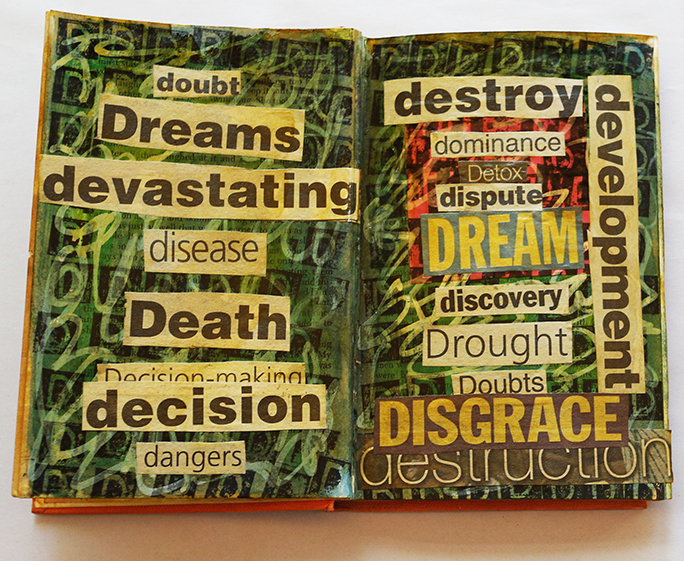 The use of text in my work also functions on those different levels but is different from the text one would see in a ‘traditional’ artists book. It is often hidden among the layers, sometimes secret and mysterious, and to be discovered. I am particularly interested in the idea that the altered book format can also make reference to ancient sacred texts and manuscripts through the use of text, images and the treatment of the surface.7

The altered book can also be an experimental narrative. The artist becomes a storyteller sequencing images (instead of a single sweep of an image), text and ideas together. Although the sequence can be the great structural instrument of the book, it may have no sequential narrative but may be thematically connected with the use of images, fragments and text, as in most of my work. The ‘movement and timing, the flicker of papers, colours, textures, elements’, are part of the ‘sensual theatre’ of artists books [and altered books] (Drucker 1998: 173).

Each page has the potential to generate different spatial formats, arrangements and the capturing of ideas. The reader needs to use their imagination. In my altered books you can go backward and forward, and spend as much time as you wish with each image, allowing them to remain open to various interpretations. 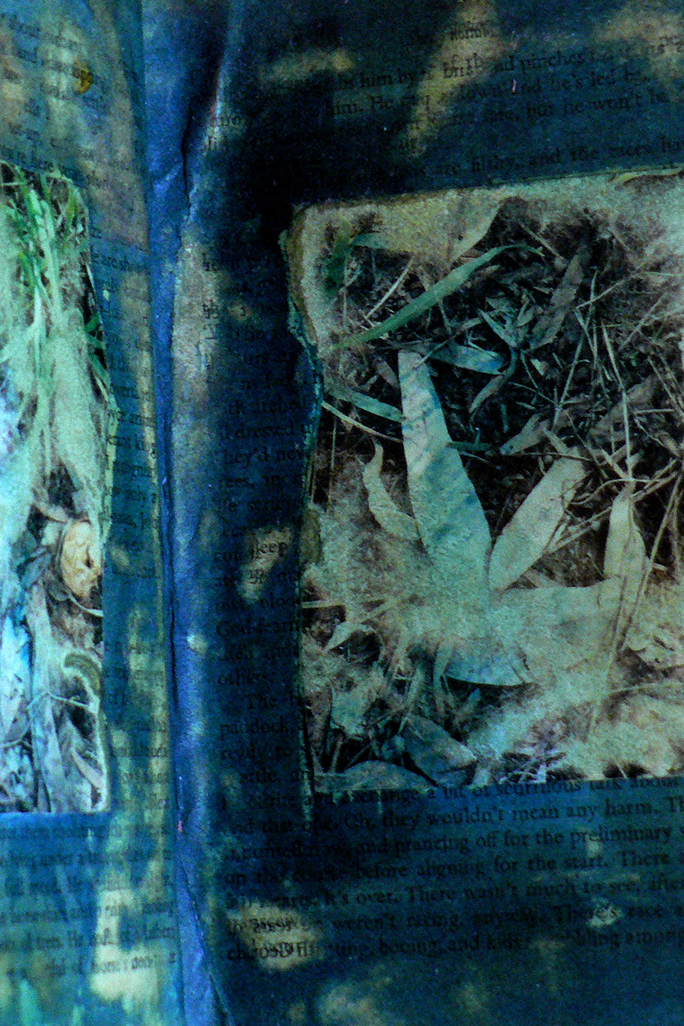 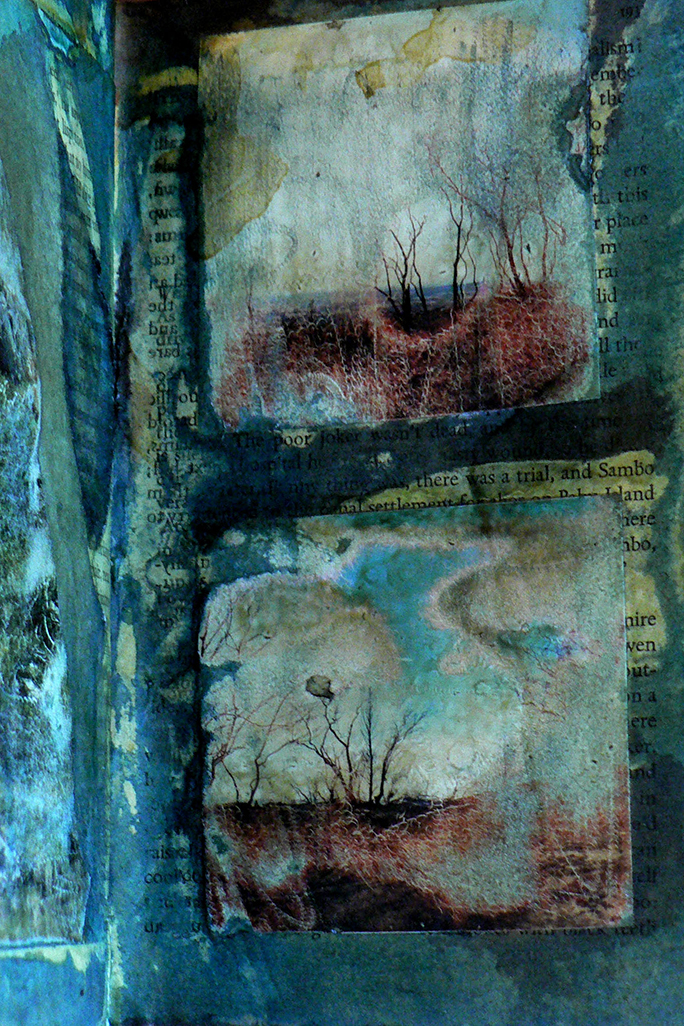 The importance of the artists [altered] book, for me, is the way it allows visual thinking, a means to convey ideas rather than just being about the craft of binding. It is about how to make a book respond to a concept. The book can go from the structural to the conceptual — ‘a leap from the observation of form as specific to the medium to the associative play of form as idea: the metaphysics of the book, its full range of roles from initiation and knowledge to perfidy and deceit’ (Drucker 1998: 173).

Artists [altered] books are an ever-expanding field with a wide range of approaches (Selenitsch 2008: 11). They are also a means of finding new and different ways to work, for myself as an artist. The concept of transformation becomes important — using the book to explore new images and ideas. I find that the technique of building a palimpsest is useful for representing new ideas, and lends itself to the transformation aspect where there is a layering of text and images overwriting old text and images. Layers from the original prints or drawings come through other images creating interesting layers of surface quality.

Finally, the artists [altered] book can embody the idea of a journal or journey — a record of ideas and images over time. Books are very portable and can travel with you: a journey through the book for the viewer. As Drucker says:

The book remains ... The fact of its independent life, its capacity to go out from the shop, the house, the office, and live on its own ... the joy of it all is that you can find it again, years later, on a shelf, and it still works — without batteries, lights, or electricity, it makes itself available again, as a new experience, a new encounter. (Drucker 1998: 174)

The poetics of altered books are created through the relationship of text, size, shape and colour. As I note above, I like to choose the book for its title, and this challenges me to respond with thematically related images. While I acknowledge the title of the books and sometimes the author, the text/context of the work is deconstructed to include new levels of meaning. The title of the book may suggest a theme or an idea so that the artwork can tell a different story from the original text, or offer a parody of the title. Words or paragraphs in the book can be used to evoke new images. Additional text or writing can be included, as in Uneasy Terms, and Child’s Play (Figs 8 and 9). The book is used to create new juxtapositions of meaning, image and surface, where the original text is visible in part through the new alterations, as in the example below. 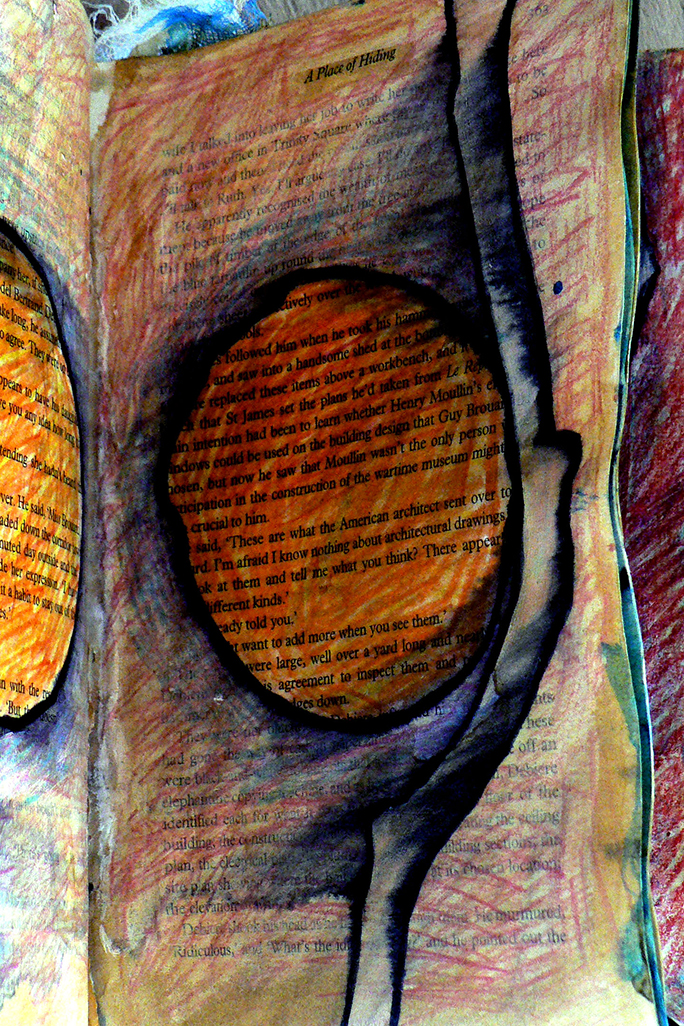 In this electronic age, artists books and altered books may eventually be the only books left in the world.

2. Although artists books are not exclusive to printmaking, their qualities make them very suitable for printmaking practices.

3. Selenitsch states that ‘artists books’ — rendered without an apostrophe — has in some circles become the standard name for this art form (2008: 6).

4. Which is also true of artists books in general. The only difference is the use of a pre-existing book.

6. Asemic writing is a wordless open semantic form of writing which may appear as words but are illegible.

7. I use a lot of bitumen and shellac in my work to make the surface look aged.

Bärbel Ullrich is a candidate for a PhD in Philosophy through Charles Sturt University, Wagga Wagga campus. Her doctorate consists of 70% studio-based research practice and 30% exegesis. The research is land-based and site-specific to her property at the base of Mount Bogong in Tawonga, NE Victoria. The focus is on an area where two creeks meet, a possible sacred site. The dominant format for her work is artists books. Prior to her research she had produced and experimented with many altered books.

Bärbel’s studio is at her property where she regularly conducts workshops in printmaking, drawing and mixed media. barbelullrich.com.au