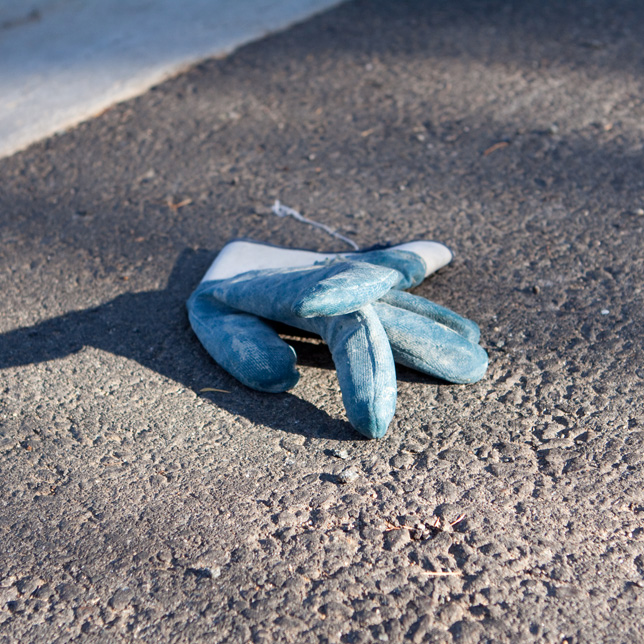 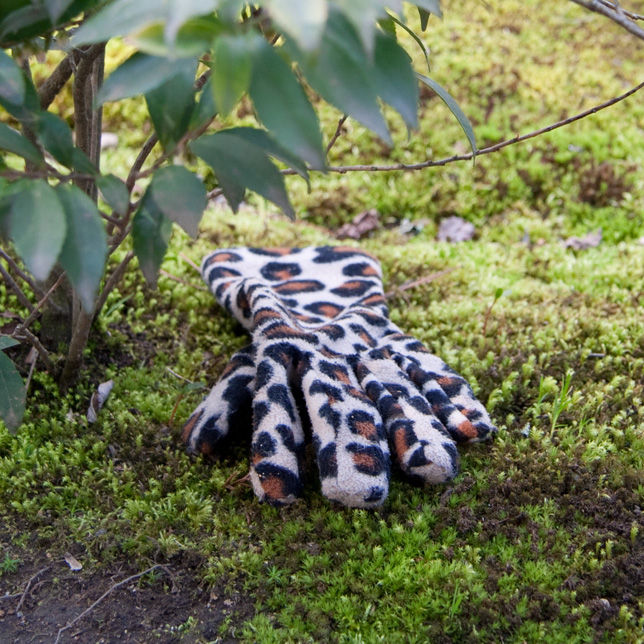 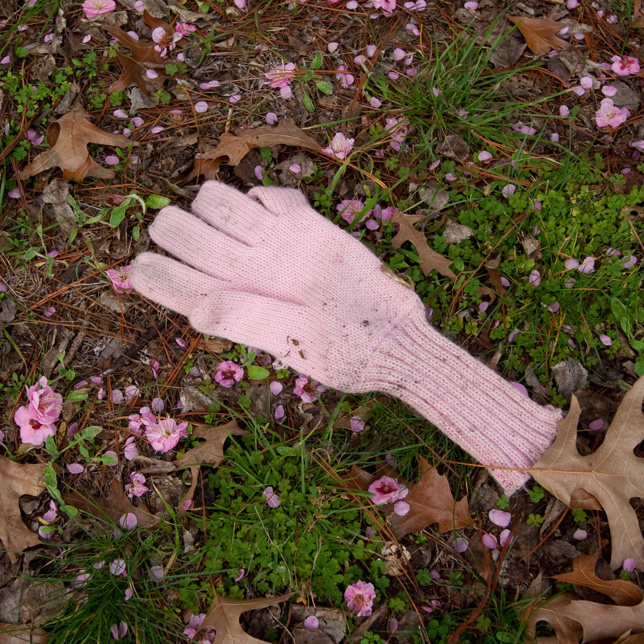 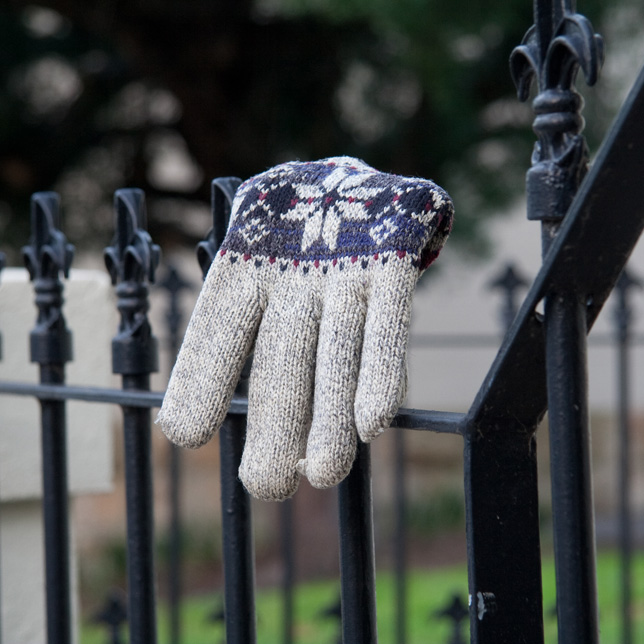 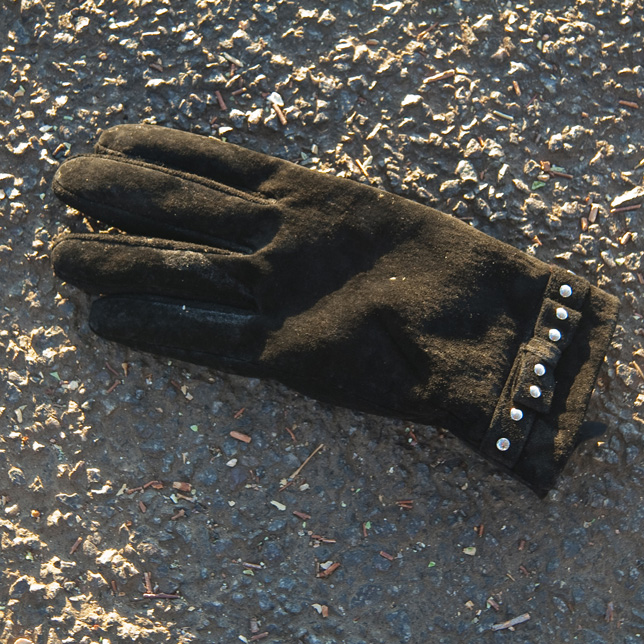 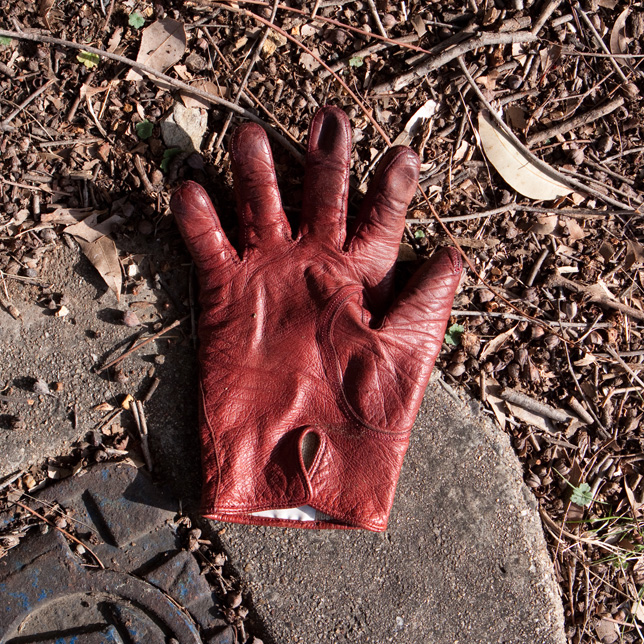 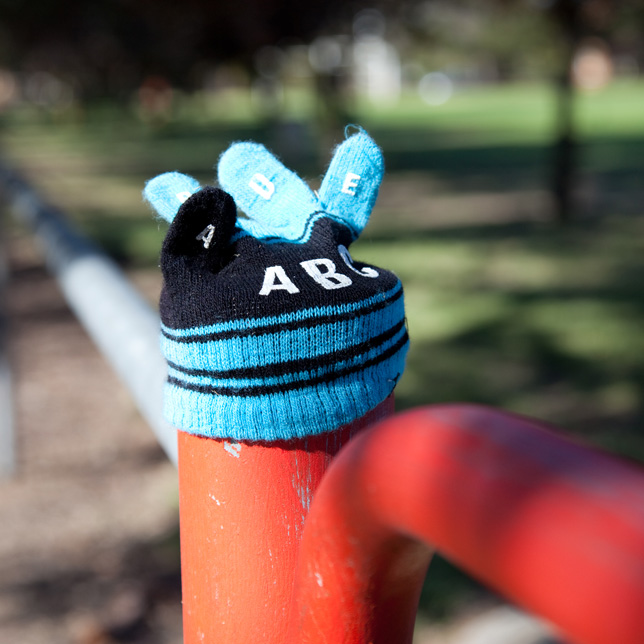 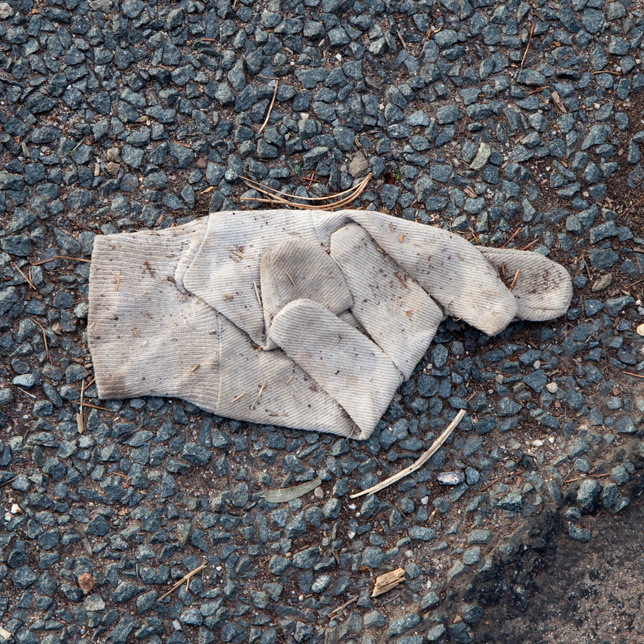 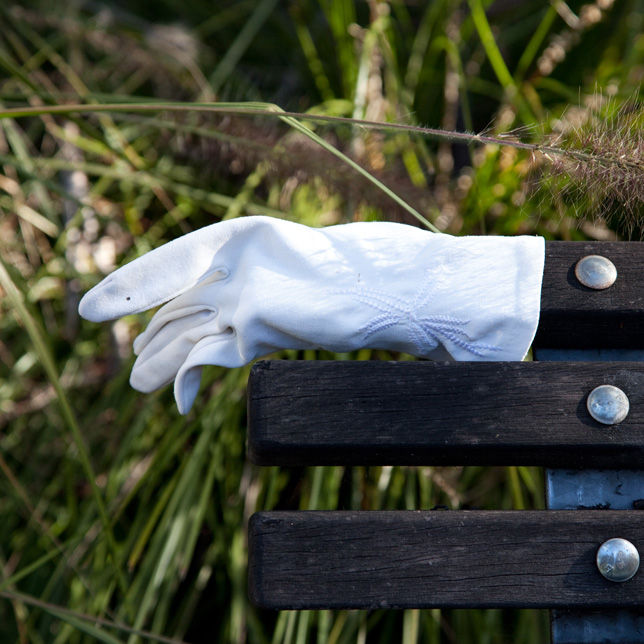 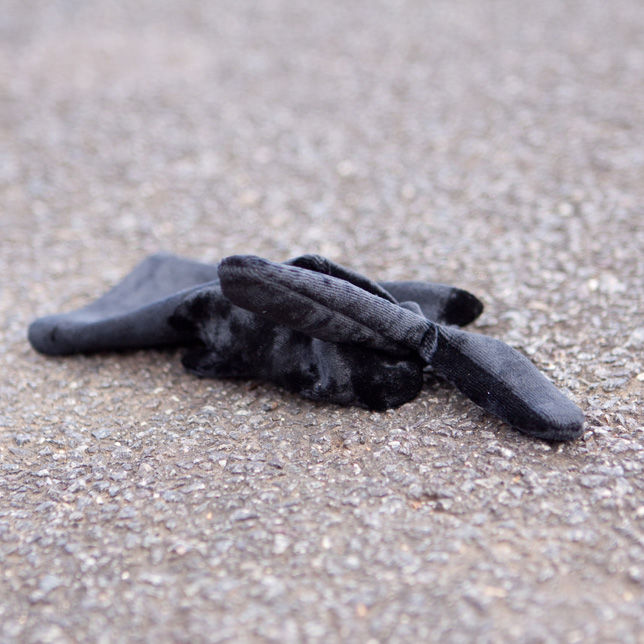 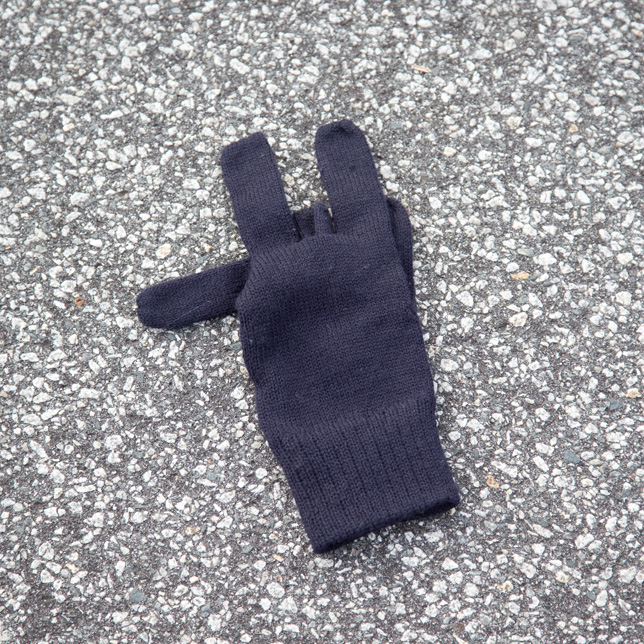 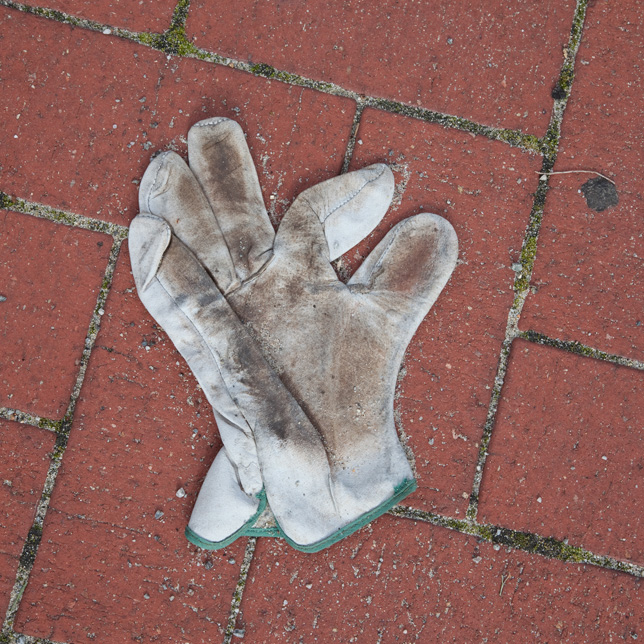 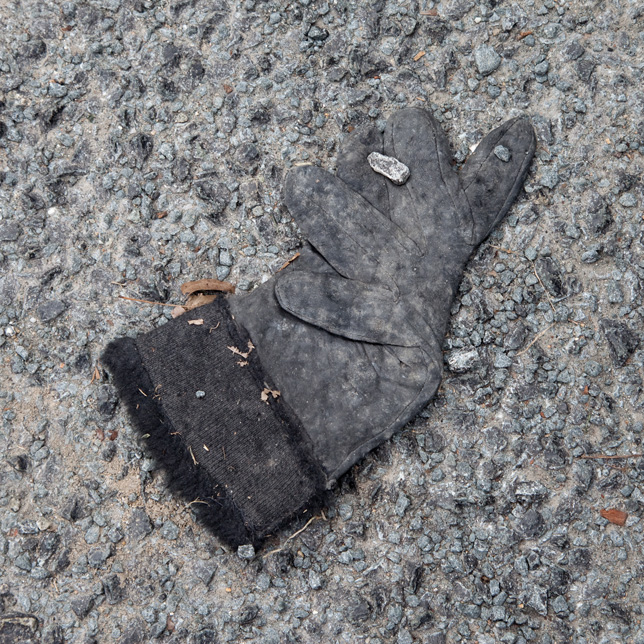 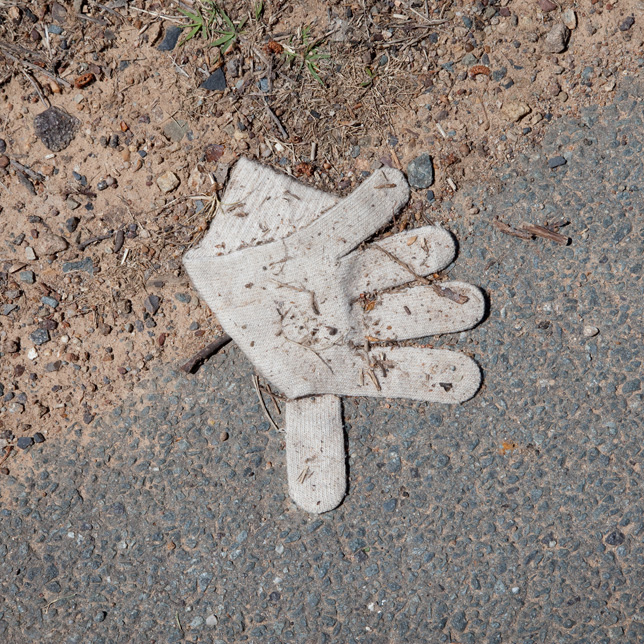 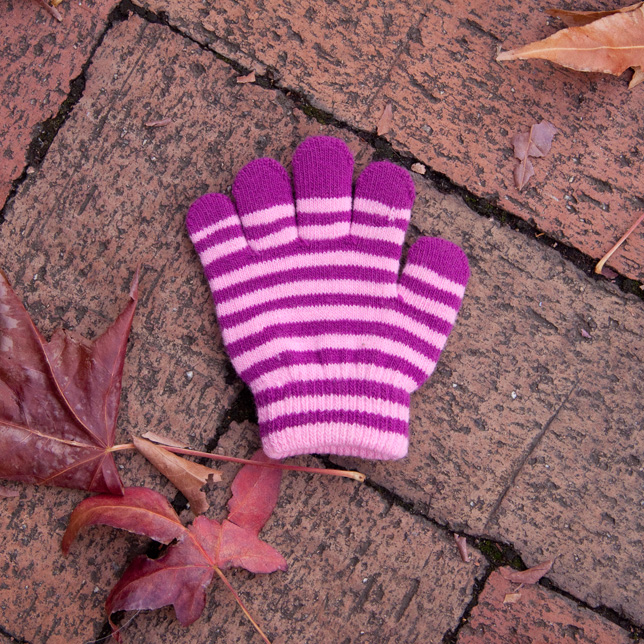 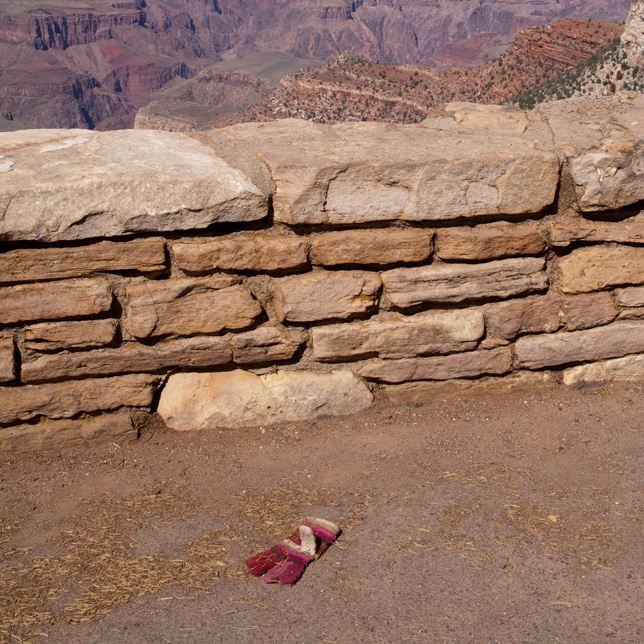 They creep along walkways and lurk in gutters. They hide under bushes and wave from fence posts. If left unnoticed they start to deteriorate, fading into the pavement. For the past nine years I have photographed and collected lost gloves.

The first glove I found was a synthetic leopard print, lying low in the bushes near a temple in Kyoto. It was the humorous nature of this escapee that caught my attention: a glove ready for adventure. The second was at the Grand Canyon in Arizona; ignored by crowds of tourists, it gathered dust as it reached towards a tragic end. Others I found simply embodied a sadness: a glove that never made it out on a dinner date, or a child’s glove alone at the park. I am drawn to the gloves’ anthropomorphic quality. Still infused with a life force, they look like they are crawling along a road: sad, dismembered body parts

When an out-of-place item of lost clothing or glove appears, we might deviate from our path to get a closer look, allowing our thoughts to travel elsewhere. For the artist it is often these deviations that inspire ideas. Esther Leslie describes street waste as ‘poetic booty’­—‘Degraded experience elevated into art, then sullied once more, if the poet is lucky, for commerce’ (Leslie 2010: 238). The affect of the out-of-place lonely glove is captured by Ilya Kabakov’s work, titled with a trace of irony, ‘Monument to the lost glove’. Kabakov installed a convincing model of an old red-leather glove on a traffic triangle near Madison Square Park, New York. Nine metal tablets on metal poles, reminiscent of music stands, stood near the glove in a half circle, each with text: utterances about the lost glove. The organisation that supported the project, Public Art Fund, states: ‘any piece of nonsense, even a glove lost by someone, can acquire infinite value and significance if it is capable of touching something very important and dear to us in our memories, in our past’. (Public Art Fund 1997) The viewer is easily tricked by the play of materials, being accustomed to the contrasting fabric of gloves with the hard surfaces of the urban landscape. The work successfully reproduces the experience of a finding a lost glove—an accidental encounter that intervenes in the intended flow of the city and often elicits an emotional response.

One day I found a black glove with diamantés on the sleeve. It was in the middle of the road directly outside my house. Its sparkling specialness reminded me of a glove I once lost from a pair given to me by my Great Aunt. They were a beautiful fine-black leather that fitted my hands perfectly, such that I could do almost anything whilst wearing them, even type on a keyboard on a cold Canberra morning. I have always kept the other glove in case its pair turns up. It was through this memory that I became curious about the owners of the gloves I kept finding. Did people feel the same sense of loss I did when I lost my glove? Not the irrevocable loss of a person or a pet, but a niggling frustration or annoyance. It was after this encounter with the diamanté glove that I started collecting, as well as photographing, the gloves I discovered. I justified picking them up by telling myself I could return them to their owners somehow.

The ability of lost gloves to connect us to strangers and places is evident in the work ‘Lost Glove’ by the artist-duo Las Hermanas Iglesias. When interviewed about their process they said: ‘We had never been to Paris and wanted to work on projects that let us experience this new place rather than work in the studio alone. ‘(…) Each glove carries with it the memory of where we found it, who we spoke to upon spotting it …’. (Moldovan  2012) The work consists of their collection of 62 single gloves found in Paris. The gloves were installed on the wall alongside a handmade replacement of the lost partner, each made of paper and painted in gouache. Similarly the artist Christine Porter produced a body of work about lost gloves after travelling to the countries of her ancestors in the United Kingdom. For Porter the lost gloves she found communicated ideas about colonisation, exile and belonging (Porter, 2009), acting as a metaphor for the ‘permanence of loss and separation in families whose members are ‘lost’ to immigration’. (Mosely 2010: 29) One etching consists of three plates, the top plate of a glove, the second a section from a map of London in the silhouette of the glove, and the third a colour wash. A spatial representation of the city and the glove are combined. Working in a variety of media, including bronze casting, oil painting and etching, Porter draws our attention to the materiality of the gloves. But it is through the ability of the glove to communicate an absence-presence—the empty hollow of a glove retaining the shape of someone’s hand—that they evoke memories and powerful human emotions.

Human Geographer David Bissell has written about the movement of lost clothing; their affective movement­—how they move us, and the movements of the material objects themselves. (Bissell 2009: 97) When we find a glove we might pick it up and place in a more visible location; a fence post, a bench or in a tree, in case the owner returns. It seems almost any movable object can find its way on to the street and back again. Using an ecological analogy Strasser describes cities as open systems rather than closed ones, where ‘trash’ is disposed of and then reclaimed in a constant cycle of re-valuing (Strasser 1999: 3). Dumped shopping trolleys (Frederick & Hayne 2005), stolen cars, fallen leaves, and a never-ending sea of coffee cups and drink bottles are just some of the things that fall in and out of circulation. For Bissell the relationship between lost clothing and the urban landscape is one of ‘conflicting materialities’, lost clothing occupying ‘a liminal space in that they are unfamiliar and defy these systems of routine perception and interpretation’ (2009: 100,102). Lost gloves in particular stand out amongst the tsunami of objects that move through our streets. Their incongruity in the landscape and the humanistic characteristics of a disembodied hand make the lost glove a poignant symbol.

However small they may be, lost gloves reveal much about movement in our cities and the significance of urban materialities. It is by moving that artists have discovered lost gloves, and it is the absence-presence signified by the gloves that artists have used to explore ideas of belonging, memory and the monumental in the everyday. The lost glove encounter, although accidental and unintended, is a moment of shared humanity and connection through things.

Katie Hayne is a Research Development Officer at the Centre for Creative and Cultural Research, University of Canberra. She is also a web designer and emerging artist. She studied Visual Arts at the University of South Australia and has exhibited work in a variety of mediums including artist's books, photography, video and painting. Her current interests include our relationship to, and the aesthetics of, discarded objects and e-waste.