I trained as an architect and I used to squat. These are two things I often tell people who enquire about my work as an artist. These parts of my life have come to be my artistic origin story, defining my interest in exploring the politics of space. I work as an artist and am currently quite nomadic, travelling across the globe and interpreting cities, or more accurately particular communities within cities.

I am currently In Indonesia exploring two kampungs (neighbourhoods) in Yogyakarta. These kampungs are situated along the city’s main river, Kali Code and are informal squatter settlements that were formed in the 70s. These neighbourhoods are well established, and maintain their own community-initiated security patrols, a monthly meeting of the kampung women, along with various other self-organised activities. The dwellings consist largely of makeshift and organic architecture and often house a whole family in one small room.  In turn a cleaning roster of the public spaces, such as the toilets,  are key to the upkeep of this well kept and tight community. Related to the lack of economic resources and the ratio of communal public space to private space, there is the feeling of a close community and strong sense of neighbourhood pride. 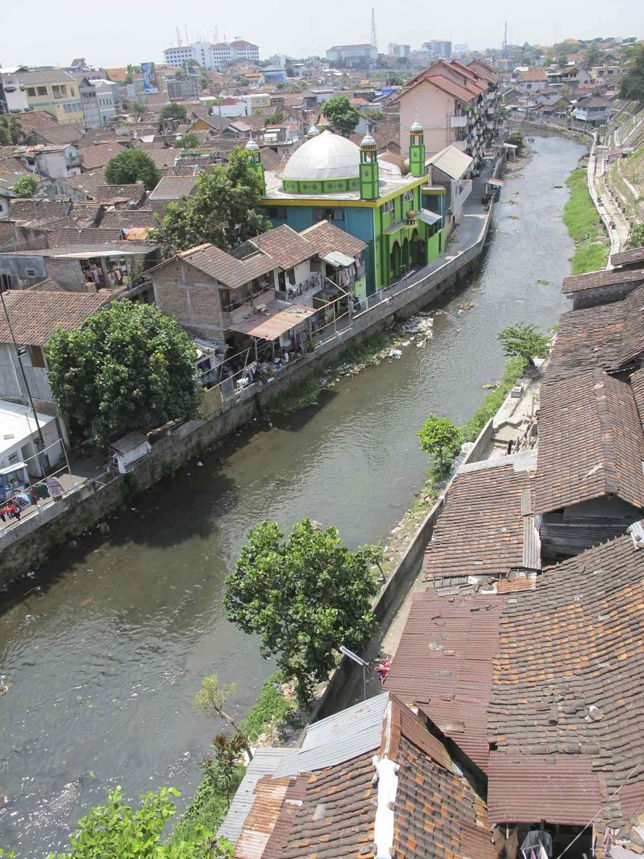 Last year the local mayor announced that he wanted to focus on rapid urban development in a four kilometre radius surrounding the main tourist street in Yogyakarta, Jalan Malioboro.  This proposed urban change includes the construction of a number of large hotels and shopping malls, in an otherwise predominantly low-rise district. Ratmakan and Jagalan are within the boundaries of the proposed gentrification.  Although these kampungs are well-established communities, when discussing ideas of ownership, their official relationship to the land is a tenuous one. In short, they are under threat of eviction.

The trend of inner city gentrification is not regulated to one particular area or region but is a global phenomena. In his 2004 book Planet of Slums, Mike Davis described the flux of people in emerging economies, such as Indonesia, relocating from rural land to urban centres in search of work, due in part to the impact of multinational large scale farming.  Now, ten years later, the majority of the world’s population lives in cities. While Davis writes that this population shift to urban centres creates new ‘Metro Core’ slums, I tend to view this migration as part of urban gentrification. As usual, the lower socio-economic communities are faced with being displaced from their homes, and Ratmakan and Jagalan are no exception.

Whilst Ratmakan and Jaglan fit much of Davis’ description of ‘slums’—as squatter settlements, consisting of organic architecture, and home to urban poor—I do not associate these areas with the word ‘slum.’  The terms ‘neighbourhood’ or ‘community’ feel more apt. Perhaps in the past the boundaries of the river and the road have prevented the kampungs from sprawling out, and now it is not the rural migration that threatens to displace these low socio-economic area’s residents but the government’s plans to ‘renew’ the area.

Previous to the looming gentrification that threatens these local communities, there was a long history of evictions—of resident ghosts.  As an artist and an architect, I have chosen to interpret this area by paralleling this impending displacement of the living through the abundance of local paranormal activity and the persistent relocation of resident ghosts. A defining factor of ghost narratives is that the squatted land that these residents live on are actually two former graveyards, one Javanese and one Chinese. Many of the residents live with gravestones built into the walls of their homes and they are also found throughout the public spaces, such as the gravestone in the wall by Jagalan's badmington court next to some playground equipment. Ghosts are a part of the everyday built environment, and in some ways it is to be expected that there is no shortage of ghost stories here. Stories about the paranormal are culturally embedded throughout the region, revealing aspects of local culture from economics to sex. Ghosts are even classified by type, such as the Jaran Penoleh, a flawless female horse ghost who, with permission from the wife of the man of the house, can excrete money after he has intercourse with her.  Another is the Genderwu, who is a hairy shapeshifter that can transform into the man of the house in order to have sex with the wife. Amongst the ‘types’ of ghosts in this region are stories that are more specific to the local area. In Ratmakan, many of the residents concur that there is a Chinese woman from Gembong, another part of Java, who haunts a particular corner near the pos ronda (security office).

There is so much paranormal activity in this area that there are two residents who I’ve been describing as the local ghostbusters: their role within the community is to move the ghosts out of the kampung and into the river. These men don’t look much like the beige jumpsuit wearing, proton pack toting Bill Murray or Dan Ackroyd, but the locals do call them when they need to get rid of a ghost. Whilst having their own resident ghostbusters does not seem out of the ordinary in Java, the idea that being a ghostbuster is a dedicated and important role in the community took more than a moment for my western sensibilities to understand. This process of ghostbusting has become an apt metaphor for the impending evictions of the Ratmakan and Jagalan people. Just as the ghost stories are vast and varied, so are the personal stories of the residents along Kali Code.  The same precarious relationship to the area that the residents face in the living world continues into the afterlife.

Speaking with one of the local ghostbusters, Pak Kuncung, I realised he is more of a ghost negotiator than a buster. He has a philosophy of not forcing the ghosts out, but tries instead to reason with them. He explains that the ghosts have been here a lot longer than us, so we must be respectful about getting them to leave. Not all ghostbusters work in the same way as Pak Kuncung. Some trap the ghosts in tiny bottles and some use various more direct techniques of eviction, without any negotiation.

The ghostmoving that happens in Kali Code has become a way for me to interpret this place and has given me a way to look at the continual impending threat of eviction that knows no boundaries, from life to the afterlife. It is understandable that Pak Kuncung is a respected member of this community as he serves an important purpose, but also because of the way in which he does it: by respectfully carrying out his balanced view of cohabitation. These ideas of the respectful negotiation of space seem to be something that elected officials and developers might consider when planning major changes effecting established communities.

If There’s Something Strange in Your Neighbourhood… was developed though a ghost story drawing workshop and interviews with Ratmakan and Jagalan residents and manifested in an inflatable ghost house installation and short film. Produced during an Asialink Residency August – October 2014 and supported by Arts NSW, the Australia-Indonesia Institute and DFAT. 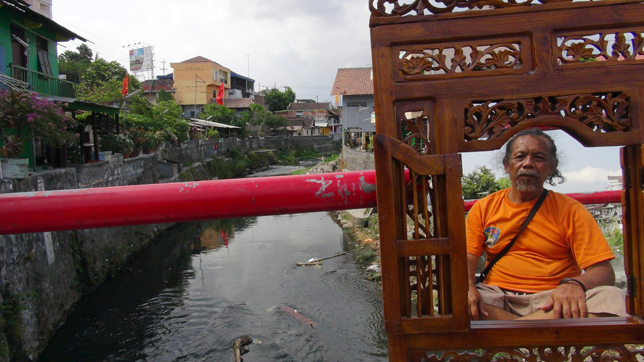 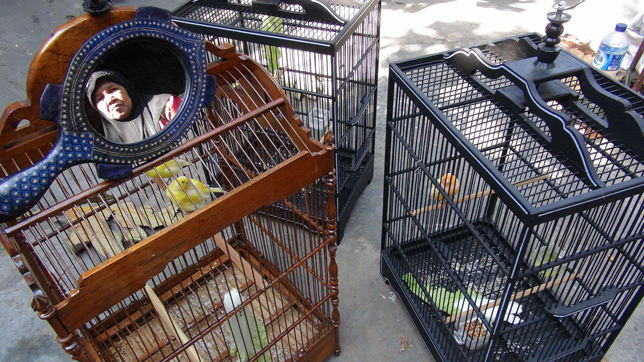 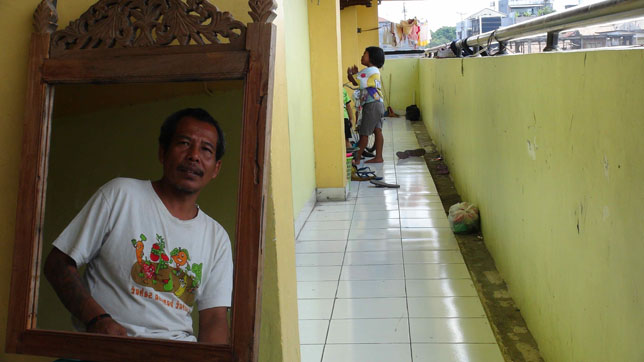 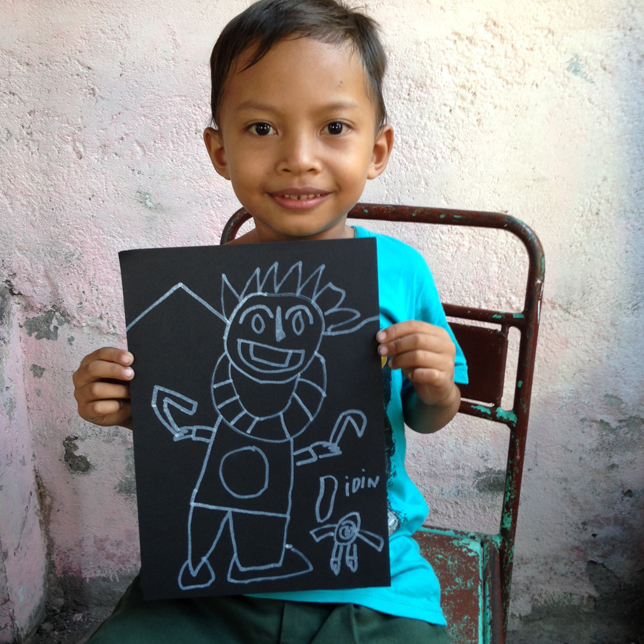 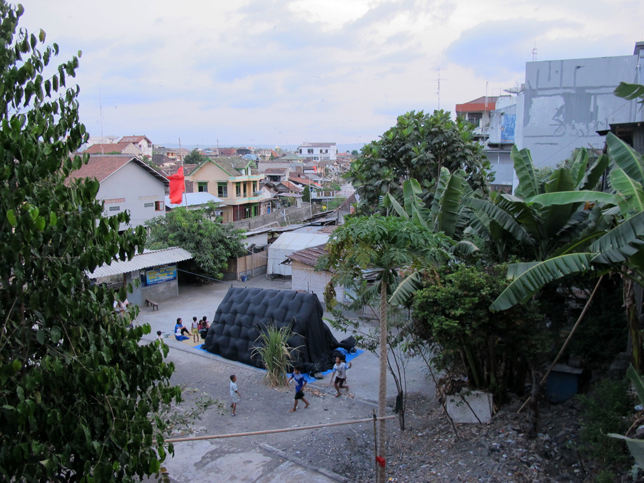 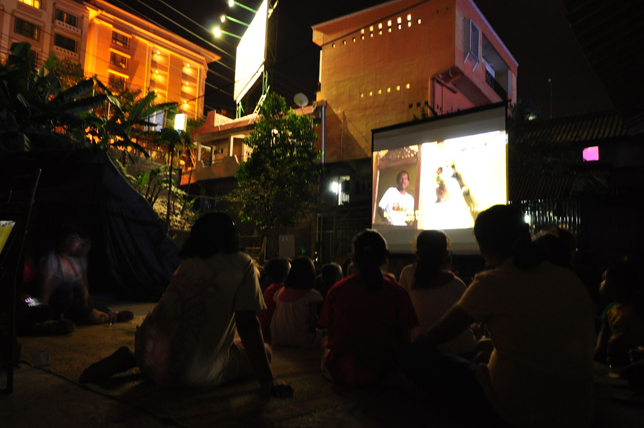 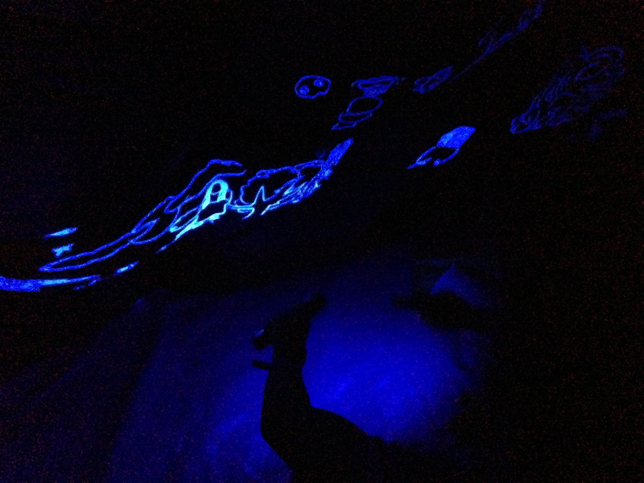 Keg de Souza is an Australian artist working with mediums such as inflatable architecture, mapping and dialogical projects to explore the politics of space.  This investigation of social and spatial environments is influenced by her formal training in architecture and experiences of radical spaces through squatting and organising. She creates pedagogical projects to foster new relationships and create site and situation specific projects with communities, emphasising participation and reciprocity. Recent exhibitions include; the 5th Auckland Triennial, 15th Jakarta Biennale and Vertical Villages at 4A Centre for Contemporary Asian Art, Sydney (all 2013) and Temporality in Architecture, Food and Communities, Delfina Foundation, London; Temporary Spaces, Edible Places, Atlas Arts, Isle of Skye, Scotland and If There’s Something Strange In Your Neighbourhood… Ratmakan Kampung, Yogyakarta, Indonesia (all 2014). She is currently an Australia Council for the Arts Creative Australia Fellow.